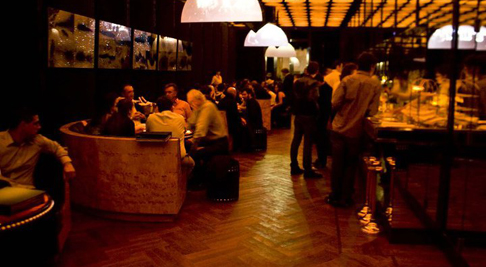 Due to its proximity to ever-trendy Casa Cruz, many wrongly believe that the two are from the same owners or that a reservation at Casa Cruz guarantees entry into BA's latest hotspot nightclub. Wrong on both. But, in fact, Isabel has nothing to do with the posh eatery made famous by in numerous celebrity sightings and visits and yet the interior look remarkably similar and it's quite easy to accidentally enter one instead of the other. The bar feels like a sawnk Paris hotspot complete with models in short skirts, one-name bachelors and swank decor that usurps almost all the local competition.

Located on a very swank strip of Palermo Soho, Uriarte is also home to several bars and restaurants that are perma-fixtures on the BA nightlife circuit. Isabel aims to be the best nightclub in the Argentine capital with line-up of VIP DJs and equally hip guests list for its Thursday-Saturday night bashes. The club is decked-out in towering swaps of drapery framing a velvet rope entrance leading into a central atrium lined in veiny white marble with candlelit drinking bar and oversize mirror reflecting a clientele of cleavage show-offs and BlackCard flashers.

Dress to impress, the velvet rope is manned by a fashion patrol of 6-foot Argentinians that frown on denim, sneakers even if their Louis Vuitton and American-branded sportswear.