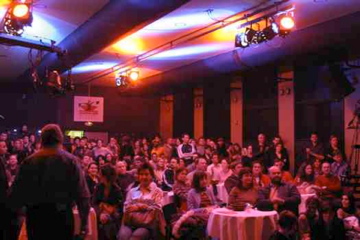 Perhaps a tribute to it utilitarian past or deep-seeded belief in the working class, Budapest nightlife is ruled by only a handful of live music clubs and performance venues. Rather than attempt to find nightlife similar to what you have in London or New York, save yourself the disappointment and make your way to A38. Located on a Ukrainian barged permanently docked on the Buda-side of the Danube, this live music acoustic club and dance hall is a local hotspot for regional bands and international music acts on stopover gigs in the Hungarian capital. During summer months the club hosts an outdoor concert series as well as a casual restaurant and rooftop terrace for afternoon lounging.&nbsp;

Doorman fear? The only way you’re not getting into this club is if you mouth off to the security staff or get too rowdy during one of the evening’s scheduled concerts. Tickets prices vary per performance.