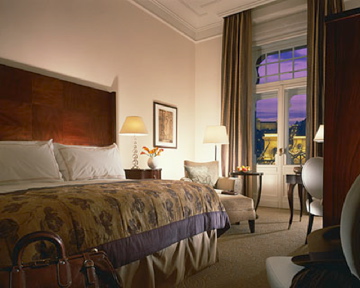 It's not difficult to imagine the equestrian parade of Hapsburg royals crossing the Chain Bridge and arriving to the Gresham Palace in the late 19th Century. And what a palace it is, one of the finest examples of Art Nouveau architecture in Central Europe breathtakingly restored by Four Seasons with sweeping staircases, stained glass, mosaics and ornate ironwork. The location originally housed a neo-classic palace, the Nako House, which was built in 1827 by Antal Deron and was based on the design of Joseph Hild. In 1880 the Gresham Life Assurance Company, who decided to build its foreign headquarters on the site in 1903, acquired the Nako House. Never truly visited by the Hapsburgs, Gresham Palace was eventually used as private apartments for Soviet troops during World War II, ultimately falling into disrepair and neglect. The resulting renovation in 1999 created one of the most opulent hotel palaces in Europe, and perhaps even the world. <br /><br />A cobblestone motor court at the face of the building offers head-on views of Danube framed by the Chain Bridge and Buda Palace. Glass-encrusted iron gates insolate the lobby area with its towering glass-dome ceiling and palatial décor where sound is never louder than a whisper. As the most prestigious hotel in the capital city, the crowd includes numerous politicians and business elite the give the hotel an upper crust vibe, bordering on too formal at times. Two restaurants (upscale Pava and more casual Kavehaz) and a cigar lounge are at opposite sides of the main floor lobby, as well as a small specialty boutique with giftware and clothing. The top floor spa area offers a more contemporary style with well-equipped fitness s center and elevated stone-rimmed lap pool surrounded small porthole-like windows overlooking the city skyline.&nbsp;

Art Nouveau perfection with 21st century amenities, the hotel and its guest room floors are interconnected by a spectacular spiral staircase and set of early 20th Century bronze elevators. White-painted corridors lead to another time, revealing intricate wooden doors with bronze detailing of vintage buzzers and butler passages. Interior spaces are generously sized and reflect the architectural heritage of the early 20th Century with step-out balconies, ornate woodwork and vaulted ceilings. Biedermeier-style furnishings are meticulously arranged around sumptuous beds awash in colors of plum and sage. Rooms are compactly assembled with small closets or wardrobe area, wooden writing desk and set of high-back chairs. Entry-level room categories, Superior rooms and Danube Superiors, vary only in their views of the surrounding thoroughfare or Danube River. Bathrooms are surprisingly generous with dark marble floors and double basin sinks adjacent to deep-soaking tub and oversize rain showers. Although we’re generally fond of the L’Occitane product line, we’d actually prefer something local to something so grossly commercial. For Hollywood star and visiting dignitaries there’s a slate of upgraded rooms, including the Tower Suite, which sits directly under one of the rooftop dome offering one of the chicest hotel addresses in the newly free world.