A bit touristy, but still a Beijing dance must 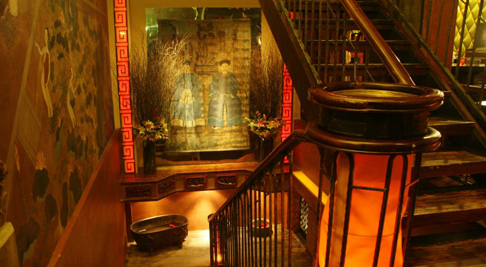 If you've been in Beijing for more than a minute, you've likely stumbled across the infamous Suzie Wong nightclub that's popular with first-time tourists and ex-pats of a certain generation. Despite it's broad appeal, Suzie Wong remains a worthy dance icon from its 40s inspired imperial palace reminiscent of the grand mansion of Shanghai booming decade. A neon-lit facade in classic style leads to an amber-lit entrance flanked by a rising iron staircase that connects the three levels and rooftop of the club. Interiors preserve a native Chinese flair with silk tapestries; elegant opium beds with floral drapery and various bar scenes surrounded in cushioned banquettes under pillowed roofs where modern-day clubbers while away the night like a modern-day opium den. During warmer months an illuminated skyline offering one of the city's top summer time terraces surrounds the roof.

Visitors range from 50-something jetsetters to 20-something Westerners that comes for weekly dance parties with themes that range from Latin and disco to Shanghai and Vegas revival complete with occasional red carpet and local VIP following.