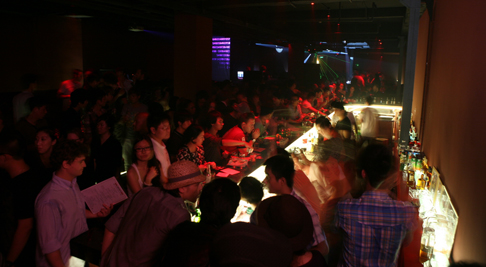 The dance hit of 2009, Lantern operated one of Beijing’s top dance and music clubs from an obscure space that eventually went on to close later in the following year. In 2011, the owners of the club that also operate their own record label have brought back the club to an all-new, much-larger location in Sanlitun that attracts the city’s underground music scene and top promoters A staircase lined in photos of some of the area’s top DJ talent leads to an underground space with long bar and main dance floor. A split design means that only half of the club is open on weeknights&nbsp; - doubling its size for busier weekend events. The design is mainly sparse, located in a former-warehouse space that sprawls along two floors with main dance level where revelers sip away on domestic beers under the brim of hipster hats and upper-level atrium with additional seating and DJ views.&nbsp;

During the week the space operates mostly as a bar scene, opening up to a full dance club during the weekend complete with music events and promoted DJs.

A bit touristy, but still a Beijing dance must