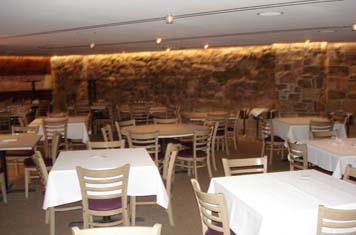 The sound of D-19 closing sent shivers through Aspen social circles, as star-chef Dena Marino moved her thoroughly modern and delightful Italian kitchen to a fancy new perch along Hyman Street directly next to swanky Moncler. Well-heeled Aspenites tuck their fur-trimmed parkas around the chairs as they settle into this cozy bistro-style restaurant and wine bar that's also one of the village's poshest Italian eateries. It's far cozier than you would imagine, no more than thirty white-clothed tabletops in a central dining area with wooden-arched windows looking out to a front patio better suited for summer dining. Ski-instructors who lead double lives as evening waiters are well groomed with crisp-white aprons and rugged Colorado smiles ready to satiate often-demanding whims.

Begin with the D-19 famous heirloom tomatoes with burrata or signature baked ‘Roman Artichoke’ with white wine, mint and chili flakes revered by local foodies. Crusty bread is served with a rich olive oil and aged balsamic, but eat sparingly as you’ll want to be hungry for the pasta course of homemade raviolis with fresh peas and shaved pecorino or gnocchi with purple heirloom tomatoes and ricotta. Main courses include "forever braised" pork osso buco, double-cut Colorado lamb chops with fava beans or roasted quail with rosemary risotto. If you’re in the mood for something from the sea, we suggest a local freshwater fish in lieu of deeper seas or keeping your cravings on land.

Show your dinnertime smarts. Ellina is short for Valtellina, a valley in northern Italy known its Bitto and Bersola where Chef Marino derives many of her slow-cooking recipes.

Where else to Dine

Owners of The Wild Fig do second, trendier Aspen steakhouse