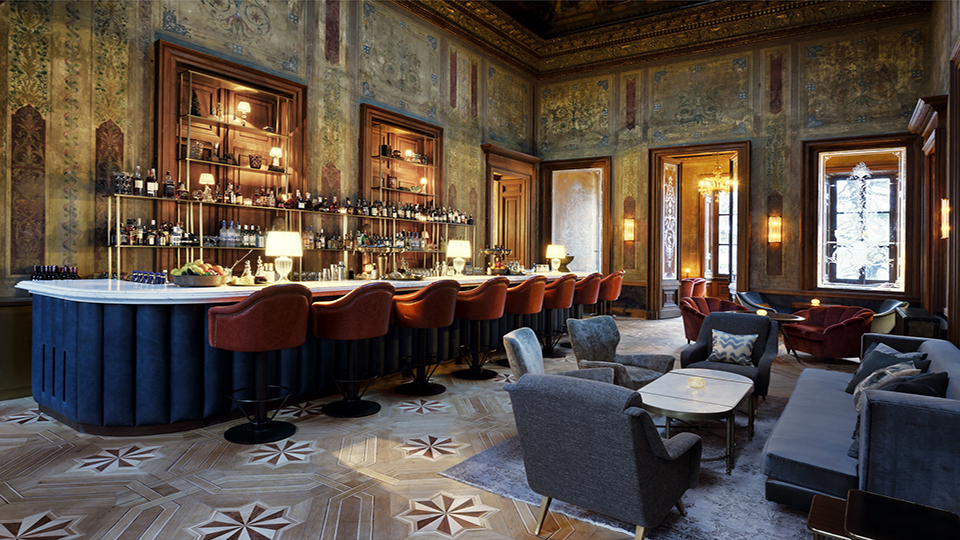 For those that have stayed at Soho House locations in London, New York, Chicago, Miami and Berlin - Istanbul is a familiar and welcome addition from the membership club that is increasingly becoming a contending luxury hotelier. In a historic 19th century mansion with newer glass tower affixed to its rear, the property comprises of an 87-room hotel, members club, two open-to-the-public eateries and spa with gym. Originally constructed as a palace for an Italian shipbuilder magnet, the property was laden with Carrara marble flooring and original rosewood trims that later served as the US Embassy before acquired by Soho House. Today, a grander Soho House than any to date resides past a grand Byzantine reception capped in crystal chandeliers and gilt ceiling that connects to a series of drawing rooms with modern mid-century décor in striped and velvety upholstery. The Club Bar wouldn't be out of place in Soho with its décor detailing and tulip-shaped barstools upon elaborate painted wood floors. The club dining room is open for lunch and dinner with herringbone floors and voluminous ceiling with spare décor that's perhaps our favorite of the member spaces. Additional eating options include Pantry Kitchen with wood oven, Mandolin terrace eatery with Aegean menu and Cecconi's that is open to the non-members and accessed from the street-level.

A total of 87 rooms are divided between the historic main building and newer annex that boasts a more modern architectural facade. Interiors mix nodes of mid-century and contemporary design with more muted British country undertones than found in other Soho House-branded hotels to date. Small and tiny rooms are still pleasurable with their luxury details from in-room bars to rain showers embedded with endless Cowshed amenities. A mezzanine option for small to large rooms offers a bi-level layout with bedroom and bath upstairs and private seating and entertaining area on the lower level. Herringbone wood floors, chunky upholstered beds and freestanding tubs prevails as in other Soho House locations making for unfamiliar mornings when you might question if you’re in Istanbul or Miami or perhaps Chicago - at least until you open the curtains. The gym and spa continue the Cowshed brand with full size fitness center that is one of the best in Istanbul - perhaps all of Turkey for that matter. And as for the rooftop pool, perhaps the property’s one shortcoming, in infinity edge and modest size is more for cocktail visuals than actual preening.